Microsoft Continuum: dreaming of the future of computing

May 26, 2015
Almost ten years ago I sat with a friend and I explained to her what I thought would be the future of computing. This is what I described. You would have a device you would carry with you at all times your "phone". I actual prefer the old term MID(mobile internet device) but that ship has sailed. Far more than just making calls this device would be always connected to the internet. It would also be powerful enough both processor wise and memory wise to do almost everything a normal person does on a laptop. When you arrive home it automatically connects to your home network of devices. You sit on the coach and pull out a wireless keyboard. Hit a button and your phone projects a desktop screen onto your tv. Or perhaps there is a smaller photo frame type screen next to your couch and it displays there. Your phone would adapt its interface to whatever input and output devices you connect to it. 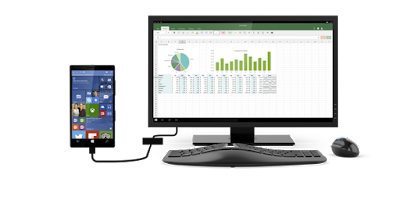 This was not some unique insight on my part. Many people have pursued this same concept. A few years ago, Motorola had a cell phone that you could buy a laptop like dock to use the phone as a laptop. It barely worked and was horrible but it showed people were looking at the sort of convergence I mentioned above. Apple has taken some steps in that direction with continuity. Just recently at their Build conference Microsoft announced something that seems really intriguing. With Continuum, Microsoft is moving computing in a direction that could make my dream a reality in only a few short years.  I'll let Microsoft's Joe Belfiore explain it for you.


The I don't watch videos version:  an app on your phone will automatically adjust to a bigger screen or a connected mouse. keyboard etc.

I was so excited about Microsoft's adaptive UX development kit and now I see its full potential.  You will be able to write an  app for the phone that can adjust its interface to any screen size or input devices.

The future is now. I just need my faster than light travel.