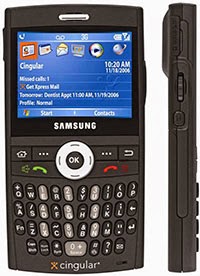 I begin with a Windows Phone. A  Windows Mobile 5.0 phone to be exact.  I bought the Samsung Blackjack. The Blackjack clearly was meant to compete with the then dominant BlackBerry. They even got sued over the name. In general I found the phone very useful and usable.  I could type very accurately and quickly on the keyboard, much more so than on any touchscreen keyboard since. I had an extended battery that could last two or three days.  Sadly, app stores did not exist back then.  To install a new app you had to download it from some webpage.  The most difficult part was finding a version that worked with your specific phone processor.  That being said, I did manage to find a nice ssh terminal and a usable irc client. It also handled email and the mobile version of IE though not great, was mostly usable. I find it funny now remembering being the only person sitting with my phone out tapping away at some app. I replaced the BlackJack with the BlackJack 2 which there isn't really much to say about.

I was finally liberated from the world of  Windows Mobile by a friend who gave me his old iPhone 3g when he purchased the new shiny iPhone 4. Even though it was two years old the iPhone was a revelation. The app store revolutionized my phone use.  All I had to do was search for an app and they all just worked.  I suddenly had reasons to have a data connection. I did now have to deal with horrible battery life and bought a mophie to compensate.

After more than a year of using the iphone, I yearned for a new smart phone. My distaste for Apple, which began as small embers, had grown to the point where I refused to buy their products. Android had matured and seemed to be competing with ios.  Initially I bought a Samsung Galaxy Captivate.  It never seemed to work right and a few months after I got it, I stepped on it.  I didn't just crack the screen, I destroyed it. It ran but wasn't useful for anything.

To replace it, I shelled out the money for a Motorola Atrix 4G. This thing running android was much better than my old iphone. Thisp hone was almost as much of a revelation as the iphone. Two aspects of the android experience quickly overshadowed what Apple had to offer. Widgets completely change your smart phone experience. Widgets are interfaces to your apps that display directly on you phones display. What that means is you don't have to actually go into the app to interact with it. The best example I can give is a music app: with a widget you can play, pause, and even select what to play without having to open the actual app. It is worlds more advanced than ios' square buttons with perhaps a number showing an update. The whole phone becomes an interactive window to your apps. The second thing that really propels android above ios is the ability to customize the experience.  Whereas ios is a very controlled and locked down experience where you can only do what Apple wants you to do. On the other hand, android is a very open platform. In most cases you can modify and personalize any aspect of the phone.

After two years, I replaced the Atrix with a Samsung Galaxy S4.  Though a little light on the battery life the phone was great. It had a excellent screen and a wonderful camera. For a while I even had an iPhone 5c.  It got very little use but I did get a feel for iOS 7. Needing money I sold both phones on ebay and bought a no contract Lumia 520 windows phone for only sixty dollars. The subject of my next post will be my thoughts on Windows Phone and the Lumia 520.