Long term review (4 months) of the Acer Aspire one netbook

I have been a huge fan of the netbook form factor ever since I had my Asus 701 in 2007. And trust me that device had some problems.  I so liked having a really small clamshell form factor that I have had a netbook in my computing arsenal ever since. Despite a few problems, my previous netbook, a HP mini 210, filled my needs.  Will the Acer Aspire One be better?

Writing dominates my use of the netbook. I just can't seem to sit at my desk and write so almost all writing has to be done mobile like. Several different mobile devices have been my writing companions.  Even including and old Sony Clie PEG-NR70 with a fold out docking keyboard. I also use the netbook in the home the same as a lot of people use a tablet.  It sits in the living room and I surf the web and check email, twitter, etc.

As part of testing the acer aspire one for review, I tried to use it as my main computer for a month.  I turned off my desktop computer and hooked up the Aspire One to my HD monitor, external keyboard and mouse, and an external hard drive. In this form I tried to do all the things I would normally do. Code using an IDE(eclipse in this case), edit video, and even game.

So first let us take a look at when I used it as my primary computer. I will admit right off the bat to being impressed.  My last netbook would never have handled the work load.  I've found that this dual-core 1GHz processor can really get the job down. It managed to run almost all my programs without almost any noticeable lag or slowdown. Yeah things took longer to start up, and it took forever to render out the video below, but actually using the apps was not frustrating.  Gaming was a different matter. Obviously I was not going to be playing the latest triple A titles.  I installed steam, a great services for machines without drives, I installed a few older games and tried them out.  Pretty much anything 2006 or earlier worked. Newer low resource  intensive games like FTL worked fine as well. To bide my time I played the old GTA3 games.  I did encounter two hardware hitches that caused some annoyance. While playing games the HDMI connection would sometimes flack out for a short amount of time. The external monitor would go blank for about a second like it had lost connection. Secondly, when coming out of the sleep mode the netbook would not recognize the keyboard and mouse connected to an external usb hub.  I had to plug the keyboard and mouse directly into the machine.

As you can imagine, if the Acer Aspire One can handle that it works well in normal living room usage. If you tax it, it can stumble a bit. As I am writing this review I have an HD video stream running, a java chat client, and a couple of javascript heavy site loaded. I am getting a little lag and stuttering from the video. Battery life can vary wildly.  When streaming HD video the fans kick up to full blast and it can be a stretch to reach four hours of battery life.  In a more surf the web and write mode it is not unusual to get almost six.  In normal use the netbook sits in the living room for three days and then I need to recharge it. Some function keys can help you extend the battery life. You can turn the wireless off when writing.  Does not do me much good since I am usually streaming music while writing. A key puts it to sleep, which frankly seems pointless when I can just put it to sleep by closing the lid.  Finally, a button turns the screen off which is great when I have it hooked up to the stereo to stream music.

I have a bigger issue when writing. They keyboard and the track pad have been causing me problems.  The HP mini had a great chicklet style keyboard.   The quality may not have been great but it had good action and a rarely hit the wrong key. The Acer Aspire one has bigger keys but for some reason I had a lot of trouble learning to be able to type at my normal speed on it.  I kept hitting the wrong key or the keys our of order. They keys have some wobble so if you don't hit near the center of the them you can hit the key next to it.  Something that bothered me at first but I have learned how to type on it. The trackpad also causes problem while typing. It is a synaptic track pad but unlike others I can't find any option to not accept clicks while typing.  You know how some trackpads won't take a click or a touch if you have hit a  key in the last second.  A function key exists turn off the trackpad completely.  So I end up using an external wireless mouse a lot.  In my opinion, it is not the best solution.

As I mention in the video below, the Acer Aspire One possesses excellent build quality. The other netbooks I have owned suffered from netbook build quality.  Things felt loose, the plastics seemed cheap, and things began to fail pretty quickly.  None of this is true with the One.  The plastics are thick and seem to be of top quality.  The whole package holds together with a nice solidness. 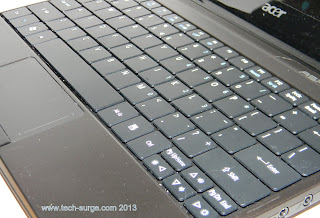 The keys wobble some but this seems intentional and not a sign of poor quality.
picture of keyboard 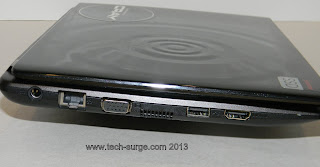 All the ports(3 usb 2.0, VGA, HDMI, ethernet, card reader, and audio in and out) are all easily accessible on the right and left side of the netbook. 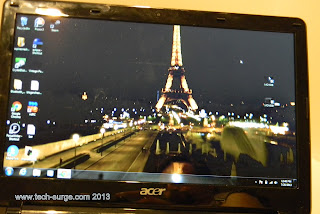 By putting such a nice screen  on this Acer has really upped the usefulness of the netbook. The main problem with the screens on my older netbooks wasn't that they were ten inches and not eleven.  1024 x 600 just isn't enough pixels.  I often couldn't fit enough of a web site on the screen to read the thing easily.  The eleven inch screen with  1366x 768 provide plenty of pixels and space for doing what needs doing.

Safe to say I really like the Acer Aspire One.The whole package comes across as competent and complete. It is big enough to be useful, heavy enough to feel solid, and yet small and light enough to be really portable.  I can toss it in my hipster bag that is made to hold an Ipad.  I do not see myself replacing this for at least a couple of years. I could see some people using this as their only computer.  If you needs are facebook, email, and surfing the web, why pay more for a tablet that doesn't have a keyboard.  For around three hundred US dollars you can get a really capable machine. My poor tablet sits neglected hooked up only to the stereo to stream music.


So I waited months to write this review in hopes that I would collate a bunch more information and be able to produce a much longer and more in depth review. As you can see I did really produce a review of any more depth than I could have done after about a week of use.  Yes I have some longer term testing of battery life and build quality but neither of those really could have just been follow ups to a quicker review. I am just not sure this longer wait for a review improved anything.  And by this point is it useful?  The Acer Aspire One has been out now for awhile.
Acer Aspire One review